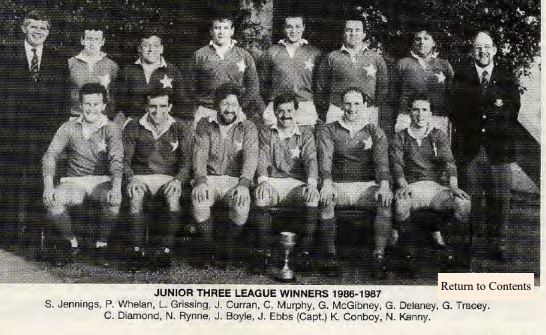 When we talk about legends of St. Mary’s College RFC, many names spring to mind. When we talk about Mary’s legends who’s almost eidetic-memory goes back to the 1970s and runs to recent years, there are only 2 names that immediately spring to mind. One of those is the great Dr. D O’Brien, and the other is the always-chatty Glenn Tracey. However, I would think even D might admit that Glenn’s penchant for recall trumps most, if not all others, in terms of sheer detail!

For those who don’t know Glenn, he’s part of a ‘true-blue’ Mary’s family. Glenn’s parents Eileen and the late Steve Snr have been huge supporters of the club for several decades. Glenn’s brother Steve is a former 1st XV player and youth coach, as well as being involved in numerous committees. Glenn’s other brother Shane is a regular visitor to Templeville Road for matches and (pre-covid) could often be seen in the Mary’s gym working out. And of course Glenn’s sister Linda has been a great supporter of the club too!

So, when we were looking for people to talk to over the break from rugby, Glenn’s name was the first to be mentioned. Glenn is a regular fixture of the club since 1977 and has been a tremendous supporter and volunteer in the club since then - a lovely man, with the most incredible recall for dates, names and scores that I have ever seen. So here below is part one of our interview with the great Glenn Tracey that we did over the phone:

Afternoon Glenn, how is everyone in the Tracey household doing at the moment?

Do you remember when you joined Marys – what year?

Why did you join Mary’s?:

It was handy! The club is just around the corner from the house!

Do you remember who the first people you met when you joined - did anyone welcome you into the club?

Glenn do you want to give us a run through of the club through the 1970s and any matches you remember - starting with your earliest memory of the club?:

In 1974/75 Paul Andreucetti (in the old club) won the Leinster Senior Cup.

In 1975 TJ Young was the captain. One star that year was Tojo Byrne who played loosehead prop - they won the Leinster Senior Cup that year. I remember the match where we beat Garryowen 19 - 0, with Tom Grace scoring all 19 points. Shay Deering was captain of Garryowen in that match! The J1s, captained by Johnny Maloney  in 1977 beat Old Wesley 10 nil in the All-Ireland Cup

This year Mick Glynn was the Captain and Matt Gilsenan the President. We were beaten by Skerries in the 1st round in Lansdowne Road. In 1977 we won the Leinster Senior League with Johnny Moloney as acting club captain. Vincent McGovern was the Manager and Noel O‘Reilly the coach. We won the J1 metro league up in Dundalk. Our Dad drove us up (all 6 in the family) – we won in injury time – there were 9 scrums leading to the final whistle and their captain stated “we won’t be beaten”!. However, Derek Early ran the length of pitch and passed the ball to Tony Hickey who got the score to win 3- 0. The Man of the Match that day was Des Early for sure - he played out of his skin – I was only 14 that year!

The J1 team also won the Metro Cup against The Curragh that year!  It was the first J1 double in the Club and Glenn was the Bag Man! The late Cathal Sweeney was the captain and we played Old Wesley in Donnybrook, with Gerry Ebbs being the standout player in that match that finished 9-0. We then won the replay 22 - 10 the following Tuesday night. Sean Jennings was the manager and Ben Nagle the coach.

Peter Elliot was the captain and a few standout players on the day were Kieran Ebbs and two Delaney brothers - Philly Delaney (who had a great boot!) and Gerry ‘Yankee’ Delaney! George Hook and Eamonn Mullen were the coaches. The J5s won the O’Connor Cup with Tom Browne as manager and Maurice Hogan as coach. Paul McInenery (the Major) was Captain of the J6s, Paddy Jennings the manager. Also involved were Johnny Kinihan, Arthur Costelloe (bag man). The J7s won the Grainy Cup with Gerry Carville as Captain. And our J8s won that cup that year - how many teams have ever had a J8 team?!

The Club Captain was Ciaran Fitzgerald – beaten by Lansdowne in the quarter final. The J1s were beaten in the Letro League semi final. The J2s were beaten by Lansdowne (the captain was Ray Sloan). Johnny McCullough scored 3 tries and all 3 were disallowed - we ended up losing 12 - 6. We won the J3 Moran double with Niall Woodcock as captain, John Carville Snr as manager and Paddy moran as coach. The J4s were beaten in the cup final by Wanderers in injury time (16 - 9). Kieran Ebbs played on the left and Dave Mooney as captain broke his collarbone in the match with Tony Burke-Moran coming on as a sub! The J5s won the O’Connor Cup in extra time against Belvedere – we stole a line out & beat them in extra time! Tom Browne was manager.

In 1979 we won 8 O’Connor cups – it was never done before and probably never will be again!

Jack Ebbs had a question for you Glenn - Do you remember playing football in the club during the summer years ago?!

Of course I do! We played soccer from around 7pm until 9pm and then up for a few beers (I wasn’t allowed to drink because of my age and I won’t get anyone in trouble by revealing anything - I may have been snuck a light beer though!) We played on the main pitch – I played in goal and used to get in trouble for taking the legs off Goodie! We played with Jack and Kieran Ebbs, the 4 Kennedy brothers (usually on my team) against the likes of Tony Burke Moran, Gerry ‘Yankee’ Delaney, Philly Delaney (who played for Cypress FC) and Brian McDonough. It’s very sad not to see football or tag rugby played in the club during the summer. We could do with an all-weather pitch – all year rugby uninterrupted!

Any away trips you remember / memorable trips you went on?

We went to Dundalk in 1978. Dad drove all the family there - we went in the car to every away game every Sunday that we could get to. They were great trips. There were a lot of J1 away games that year.

Any bus-trip stories you could tell?

Kitty Fogarty & Eileen Ebbs were in charge of the away bus trips – Oh Jesus they were wild! But what happens on tour stays on tour so I can’t say anything!

Does anyone stick out as being particularly kind or helpful to you in your time in Mary’s!

Jack Ebbs - definitely Jack. Jack was very good to me! When he was Captain of the J3s he used to bring me to and from the games and look after me. He was very kind and always happy to help. Johnny McCullough was also very good to me.

What events in the club really stand out in your mind?

In 1978 Mary’s won the ‘Digging Scheme’ – first time it was ever won by a club. I was involved in digging trenches on the pitches in the club for drainage. There were no JCBs and the men in charge were Johnny McCullough, Charlie Barry, Paul Dean and Kieran Ebbs. Kieran used to show up in lovely silky shorts & t-shirts - I used to throw him into puddles to annoy him! He got in plenty of trouble when he went home covered in mud! That's why I got my nickname: “The Bowsie”!

Thanks Glenn, we’ll pick up the conversation next week and have a look at the 1980s! Stay safe and chat then!

Stay tuned to our emails because next week we’ll cover the 1980s in St. Mary’s College RFC with Glenn!

**Thanks to Lucia Ebbs for typing the conversation as it took place - it made my job a lot easier!

A Conversation With Glenn Tracey (Part 2)

Click below to read Part 2 of our 'Conversation With' the...

Congratulations to our monthly winner of the €1,000 club ...

Myra FANAGAN RIP   Dear Member,It is with regret that we...